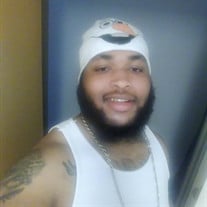 Mr. Ryan D. Wright, Sr., 27, of Peoria, IL passed away at 8 PM on Sunday, March 31, 2019 at OSF St. Francis Medical Center, Peoria, IL. Ryan was born in Peoria, IL on March 19, 1992 to Timothy Wright and Michelle Smith. Ryan was a 2011 graduate of Manual High School where he lettered in four sports, football, wrestling, swimming and baseball; but football was his favorite. Ryan loved his family. He was very devoted to his children. His family was his everything, he would do anything for them. Ryan leaves to cherish his most precious memory his parents, Timothy (Shanea) Wright and Michelle Smith both of Peoria; Fiance, Keona Bell; three sons, Ryan Wright, Jr., Jayden Wright and Jaecion Wright all of Peoria; one brother, Romeo (Aulysha Booker) Johnson of Oxford, MS; four sisters, Eemoni Smith, Tyketra Wright, Brooklyn Johnson and Jasmin Williams all of Peoria and a host of nieces, nephews, other relatives and friends. He is preceded in death by his grandfather, James Thomas and great grandmothers, Limmie D. Ashford, Cora L. Smith and Ruby Wright. Funeral services will be held at 12:00 Noon on Monday, April 8, 2019 at Victory Christian Church with a visitation one-hour prior beginning at 11 AM. Host Pastor Charles Brown will officiate. Rev. Spencer Gibson will bring the eulogy. Ryan will be laid to rest at Lutheran Cemetery. Simons Mortuary has been entrusted with arrangements. Online condolences may be made at SimonsMortuary.com.

The family of Mr. Ryan Wright Sr. created this Life Tributes page to make it easy to share your memories.

Send flowers to the Wright family.