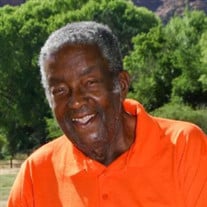 Mr. Sam Polk, 86, of Peoria, Illinois transitioned to his heavenly home at 10:58 pm on Friday, September 17, 2021 at OSF St. Francis Medical Center, Peoria, IL. Sam was born on March 6, 1935 in Memphis, Tennessee to proud parents, Charlie and Nellie Jane (Jones) Polk. Sam received his early education in the Memphis school system. Sam moved to the Peoria, IL area in the 1940’s to attend Greenley and later, Woodruff High School. During that time, he was a Boy Scout at Carver Center, Troop 38, under the leadership of Mr. Frank Campbell; who became part of the inspiration of the life of service and character Sam demonstrated to date. He was inducted into the US Army, March 15, 1955 honorably serving his country, including time spent in the US Army Reserves, until March 15, 1963. Sam worked and was Supervisor for the Peoria Public Works Department for over 45 years, retiring in 2002. He began serving the Peoria community through the National Association for the Advancement of Colored People (NAACP) local branch. As Vice President, under the leadership of another noble and inspirational man, John Gwynn Jr., Sam advocated tirelessly for equal employment opportunities for minorities, justice, voting rights and overall basic human rights through peaceful boycotts, demonstrations and organization. He volunteered and advocated for equality and had been a lifetime member of the NAACP since the 1950’s. He was a former member of the Henry Brown Lodge PHA and member of the Peoria Tri-County Urban League’s Guild. Through the Tri-County Urban League, Sam was supportive of the city’s youth and those in need, even after his daughter’s involvement and departure to college, 20 years ago. Tomorrow’s Scientists, Technologists and Managers (TSTM) is a program Sam supported by chaperoning, attending meetings and donating time and finances through fundraising and directly, for children who were unable to financially participate in college visits and were otherwise in need. Personally, and through the NAACP, Sam has also supported the Carver Center so that it may remain a community resource for children and adults alike. Having his back yard, literally behind Carver Center at one point, he understood the importance for citizens, camps and other programs for youth to have a safe facility in which to house their program in the community. In this vein, he participated on the committee to reopen the center after its 2011 closure by advocating for Tax Increment Financing (TIF) funds to be allocated for the redevelopment and urban renewal efforts of Carver Center, which resulted in its reopening in 2013. Since his retirement from the City of Peoria as a supervisor in 2002, he has mentored about a dozen young men. He has taught them work ethics, goal setting, financial management through stipends, decision making, character building, community involvement and skill development through apprenticeship opportunities. Sam enjoyed being a behind the scenes supporter of worthy causes, people and organizations. He was always willing to give a hand to those willing to take a step. Other notable organizations to which he contributed are the Heritage Ensemble, St. Martin De Porres Boy Scout Troop, local food pantries, Girl Scouts, St. Jude, Susan B Komen and of course, The Whitney M. Young Jr. annual events. Sam had an amazing sense of humor. He loved jazz music, especially albums by Myles Davis. If there are any last words he would want to say, it would be GO VOTE! Sam leaves to cherish his precious memory his loving and devoted wife of 47 years, Mrs. Jean A. Polk of Peoria, IL; two children, Kenneth Sam Polk, Sr., of Muskegon, MI and Celeste (Donald) Polk-Coverdell of Brandywine, MD; 5 grandchildren, Darnell, Kenneth, Jr.,(Tyeisha), Kevin, Sr.,(Jazmyn), Caleb and Donavan; 6 great-grandchildren, Skylar, Kailani, Kassadi, Kevin, Jr., Kennedi and Kaydence; 3 nieces, Jonelle (Daniel) McCloud, Rebecca Polk and Karen (Billy) Raymond; and a host of other relatives and many friends. He is preceded in death by his parents; one daughter, Sheryl Gulley; one brother, James Polk; one grandson, Jonathan and a nephew, Kevin Polk. An evening visitation will be held from 5 pm – 7 pm, Wednesday, September 29, 2021 at Simons Mortuary. Funeral services will be held at 11 am on Thursday, September 30, 2021 at Prince of Peace Baptist Church, with a visitation at 10am. The host Pastor is Rev. Simon J. Holly, Jr. Rev. Marvin Hightower, Pastor of Liberty Baptist Church will officiate and bring words of comfort to the family. In lieu of flowers, donations to the Peoria Chapter of the NAACP would be Sam’s preference. Donations can be sent to PO Box 6002, Peoria, IL 61601 or via website at www.naacppeoria.com. Sam will be entombed at Resurrection Mausoleum where full US Army Military Honors will be rendered. Simons Mortuary has been entrusted with arrangements. Online condolences may be made at simonsmortuary.com. The service will be live streamed on Simons Mortuary's Website or Facebook page at https://www.facebook.com/Simons-Mortuary-232095303487150 promptly AT THE TIME OF THE SERVICE. Due to Covid-19 restrictions, social distancing is encouraged To be consistent with recommendations from the National Funeral Directors Association (NFDA), funeral home directors have been instructed and should follow CDC guidelines on gatherings, including those directly related to funerals, visitations, or graveside services. *In an effort to mitigate the spread of COVID-19, we ask that everyone in attendance: wear a face mask and refrain from hugging, kissing and shaking hands (as hard as it is to see someone you care about and not touch them). *It is our responsibility as a Funeral Directors, to do everything we can to advise families in order to honor our beloved Families and to keep everyone as safe as possible. Thanks in advance for your cooperation!

Mr. Sam Polk, 86, of Peoria, Illinois transitioned to his heavenly...

Send flowers to the Polk family.