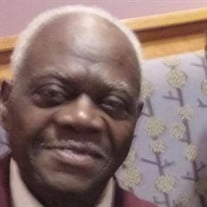 Elder Sidney Taylor Wilkins, 88, of Peoria, IL passed away peacefully at 7:23 am on Wednesday, June 27, 2018 at Riverview Nursing Home in East Peoria, IL. Sidney was born on June 22, 1930 in Cold Water, Mississippi to Robert and Elcinda (Harris) Wilkins. Sidney was a veteran who honorably served in the United States Army from 1951 to 1953 during the Korean Conflict. He was self-employed as a general contractor, renovations expert, and an auto body mechanic for over 20 years. Sidney was ordained as a minister in St. Louis, MO many years ago. Sidney was a faithful member of Prince of Peace M.B. Church where he served as Associate Pastor. He was a fisherman, hunter and a jack of all trades. Sidney was extremely friendly and had a heart for everyone. He was well respected by the young and old. Sidney was very stylish; he loved clothes, suits and his Stacey Adams shoes! He loved life and loved the Lord. Sidney found solace in lifting others up. He always lifted his hands to the Lord in praise. Sidney leaves to cherish his most precious memory; one son, Sidney Wilkins of Indianapolis, IN; three daughters, Anita Hall of Seattle, WA, Cynthia (Capree) Smith of DeKalb, IL, Rita Jones of Peoria, IL; one brother, Horace Wilkins of St. Louis, MO; ten grandchildren, six great grandchildren and a host of nieces, nephews, other family and many friends who also adored him. He is preceded in death by his parents; one daughter, Mary Wilkins; four brothers, Homer Wilkins, Robert Wilkins, Charles Wilkins and Thurman Wilkins; five sisters, Guithey Edwards, Ceonia Brown, Elsie Washington, Eva Nelson and Robbie French. A funeral service will be held at 11 am on Friday, July 6, 2018 at Prince of Peace M.B. Church with a visitation one-hour prior beginning at 10 am. Pastor Simon J. Holly, Jr., will officiate. Sidney will be laid to rest at Camp Butler National Cemetery, Springfield, IL on Monday, July 9, 2018. Simons Mortuary has been entrusted with local arrangements. Online condolences may be made at SimonsMortuary.com.

The family of Elder Sidney Taylor Wilkins created this Life Tributes page to make it easy to share your memories.

Send flowers to the Wilkins family.