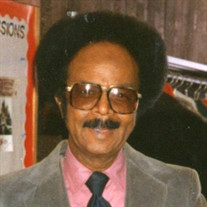 Elder Sol Samuel Terrell, Jr., 94, of Peoria, IL transitioned peacefully to his heavenly home at 10:11 am on Monday, August 20, 2018 at Unity Point Proctor Hospital surrounded by his family. Sol was born on September 24, 1923 in York, Alabama to Sol Sr., and Emma (Pearson) Terrell. He married the love of his life, Roxie Lee Walker, on August 15, 1950. She preceded him in death on March 29, 2009 after 59 years of marriage. Sol was a quiet giant who worked hard and loved his family and church. For many years, he owned and operated the gas station on 5th and Sheridan street where he was a mechanic and enjoyed working on cars. He later worked as a security guard at the Allied Agency for 22 years retiring in 1990. Sol was a faithful member of Central Church of God where he and his wife, Roxie, were founding members. Sol formerly served his church as Elder, deacon, head usher and maintenance engineer. Sol enjoyed fishing, hunting and family gatherings. He was also a sharp dresser. Sol leaves to cherish his most precious memories, his loving and devoted family; five daughters, Grethlyn Terrell of Columbus, OH, Judy (Nathan, Sr.) Jackson of Peoria, Linda Martin of Inver Grove Heights, MN and Darlene Terrell and Jacqueline Terrell both of Peoria; two sons, Danny Terrell and Donald Terrell both of Peoria; 23 grandchildren; a host of great and great-great grandchildren; and a host of nieces, nephews, other relatives and friends. He is also preceded in death by his parents; one son, Saul Terrell, who passed on October 26, 2005; and 14 siblings. A funeral service will be held at 11 am on Saturday, August 25, 2018 at Central Church of God with a visitation beginning at 10 am. Pastor Al Ivy will officiate. Sol will be laid to rest at Parkview Cemetery. Simons Mortuary has been entrusted with arrangements. Online condolences may be made at SimonsMortuary.com.

Elder Sol Samuel Terrell, Jr., 94, of Peoria, IL transitioned peacefully to his heavenly home at 10:11 am on Monday, August 20, 2018 at Unity Point Proctor Hospital surrounded by his family. Sol was born on September 24, 1923 in York, Alabama... View Obituary & Service Information

The family of Elder Sol Samuel Terrell Jr. created this Life Tributes page to make it easy to share your memories.

Send flowers to the Terrell family.