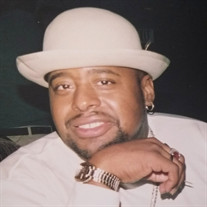 Mr. Timothy Fitzgerald Robinson, Sr., 54, of Peoria, IL passed away at 1:42 am on Sunday, December 16, 2018 at OSF Health Care Heart of Mary Medical Center, Urbana, IL. Timothy was born on October 29, 1964 in Peoria, IL to Sammie and L. Rebecca (Greer) Robinson. Timothy was a truancy officer with District 150 schools. He served in the US Army as a chef during his active duty. After his discharge from the service he continued being a chef. Timothy was a 1982 graduate of Peoria Manual High School. He later attended Illinois Central College to continue his education. He was a single father of seven children for 10 years. Timothy loved his family and his favorite food was fried chicken. He also loved football, planning family gatherings and singing with his nephew DeAndrey. Timothy leaves to cherish his most precious memories four sons, Timothy (Whitney) Robinson, Jr. and Kenneth Robinson both of Peoria, Johnnie Alexander of VA and Elijah Robinson of Fairview, IL; five daughters, Victoria Wright of Houston, TX, Brianca Robinson and T’Morro Cagle-Robinson both of Peoria, LaCarla Robinson and Oriana Robinson both of Champaign, IL; four brothers, Christopher Greer and Darrell Reed both of Peoria, Javier Swafford of Milwaukee, WI, Sherrod Swafford of Danville, IL; six sisters, Satina Rebollar of Peoria, Debra (Larry) Hill of Columbiana, AL, Nikita (Michael) Crutcher of Galveston, TX, Darene (Sam) Dudley of Milwaukee, WI, Darlene (Michael) Harston, MI and Philicia (Daryl) Netters of Peoria; one god daughter, Andrea Johnson, 26 grandchildren and a host of nieces, nephews, other relatives and friends. He is preceded in death by his parents; one son, Brandon Thomas and one sister, Sheila Bassett. Funeral services will be held at 12 noon on Thursday, December 27, 2018 at Zion Baptist Church with a visitation beginning at 11 am. Pastor Samuel Duren will officiate. Timothy will be laid to rest 12 noon on Friday, December 28, 2018 at Camp Butler National Cemetery, Springfield, IL with Military Honors. Simons Mortuary has been entrusted with arrangements. Online condolences may be made at SimonsMortuary.com.

The family of Mr. Timothy Fitzgerald Robinson Sr. created this Life Tributes page to make it easy to share your memories.

Send flowers to the Robinson family.