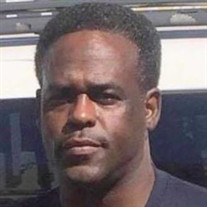 Mr. Todd Derrick Wright, 53, of Peoria, IL transitioned to his heavenly home at 8:10 AM on Monday, July 15, 2019 at Unity Point Methodist Hospital surrounded by his family. Todd was born May 29, 1966 to Henry and Jessie Mae (Little) Wright. He was a 1983 graduate of Manual High School where he was a 4 Letterman all four years of high school in Track and Football. As an outstanding football player, Todd earned the title of All Conference, All State and All American. He not only excelled in football, but Track and Basketball. As a hobby, Todd was known to be the record keeper of Manual High School Football memorabilia. He formerly worked at Players’ Modern Clothing Store and as a teachers’ aid with Webster Head Start. Todd leaves to cherish his precious memory three children, Todd Wright of Peoria, IL, Sherika Wallace of Arlington, TX and Swione Lee of Indianapolis, IN; his mother, Jessie Mae Wright of Peoria, IL and father, Henry “Snoot” Wright of Indianapolis, IN; four brothers, Alphonso Wright of Indianapolis, IN, Edwaldo (Linda) Wright of Greenwood, MS, Tremayne (Lauren) Wright, of Las Vegas, NV and Kendrick Wright of Peoria, IL; two sisters, Justina (Mark) Lynch and Rona Scott both of Peoria, IL; five grandchildren; a host of uncles, aunts, cousins, nieces, nephews, other relatives and friends. He is preceded in death by a sister, Ramona; his grandparents, Janie Mae Banks Little, Frank & Queen Little and Wesley & Legartha Wright. A memorial service will be held at 1 PM on Tuesday, July 23, 2019 at New Morning Star M.B. Church with a visitation one-hour prior beginning at 12 Noon. Pastor Cleveland Thomas, Sr., will officiate and Minister Donald Cummings will bring the eulogy. Simons Mortuary has been entrusted with arrangements. Online condolences may be made at simonsmortuary.com.

Mr. Todd Derrick Wright, 53, of Peoria, IL transitioned to his heavenly home at 8:10 AM on Monday, July 15, 2019 at Unity Point Methodist Hospital surrounded by his family. Todd was born May 29, 1966 to Henry and Jessie Mae (Little) Wright. He... View Obituary & Service Information

The family of Mr. Todd Derrick Wright created this Life Tributes page to make it easy to share your memories.

Mr. Todd Derrick Wright, 53, of Peoria, IL transitioned to his...

Send flowers to the Wright family.