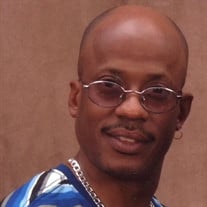 Mr. Tonaio Renea Johnson, 59, of Peoria, IL passed away Monday, May 11, 2020 at his home. Tonaio, affectionally known as Tony, was born in Peoria, IL on March 16, 1961 to Willie Dee, Sr., and Joan (Parker) Johnson. Tony was a 1979 graduate of Manual High School where he was a member of the track team, the African American Club and a favorite participant in the schools’ many fashions shows. He married Rose Carter and they have shared more than 35 years of love and affection. Tony was a laborer at IVEX Specialty Paper for over 25 years. He later worked at Behr Iron and Metal Recycling Company and was an auto detailer in his spare time. His long-time vision was to open his own auto detail shop and soul food restaurant. Tony was an all-around handy man, Master BBQ Griller and an avid Chicago Bears fan. He was a big-time family man who loved his wife, mother, children, grandchildren, siblings, nieces and nephews. Tony was a mentor to his children’s friends and other youngsters in the neighborhood. He was a member of Peoria Friendship Baptist Church. Tony leaves to cherish his most precious memories his wife, Rose Johnson of Peoria IL; step father, William Jones of Peoria, IL; one son, Tonaio “TR” (Latrice) Johnson, II of Peoria, IL; four daughters, LaQuayla Johnson of Lithonia, GA, Allanna (Craig Flowers) Johnson of Chicago, IL; LaKeisha Johnson of Peoria, IL and Andrea Johnson of Mesa, AZ; four brothers, John (Ruby) Parker of Atlanta, GA, Marion "Pee Wee" (Diane) Parker, Kenneth Parker and Sean Jones all of Peoria, IL; two sisters, Renetta Watts and Shielondria (Shane) Parker both of Peoria, IL; 20 grandchildren; one great-grandchild and a host of nieces, nephews, other relatives and friends. He is preceded in death by his parents; three brothers, Floyd Parker, Willie Johnson, Jr., and Ricky Johnson and one grandchild, Ariyanna Miller. A private funeral service will be held at 12:00 noon on Wednesday, May 20, 2020 at Simons Mortuary with a visitation one-hour prior beginning at 11 am. Rev. Eddie Jackson will bring words of comfort. The service will be streamed live on Simons Mortuary Facebook page. Simons Mortuary has been entrusted with arrangements. Online condolences may be made at SimonsMortuary.com Facebook Livestream page https://www.facebook.com/Simons-Mortuary-232095303487150/