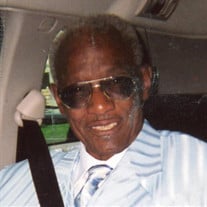 Mr. Walter Lee McCall, 84, of Peoria, IL transitioned peacefully from this life to his heavenly home at 8:50 AM on Monday, September 9, 2019 at his home surrounded by his family. Walter was born on May 29, 1935 in Covington, TN to Jim and Margaret (Stark) McCall. He accepted Christ at an early age. At the age of 10, Walter and his family moved to Peoria, IL where he was educated in District 150 and graduated from Manual High School. Walter married Vera T. Johnson; she preceded him in death. He then married Pearline Bailey on October 4, 1965. Walter began his work experience at Starr Gas Station on Jefferson. He also worked at Lens and Crafts Camera Store. Walter became a Journeyman at Caterpillar, Inc., then was promoted to Master Electrician. He retired from Caterpillar in 1992 after 31 years of service. Walter was “Mr. Fix It”. His passion was fixing TV’s and cars. He was an all-around guy who loved gardening, solving crossword puzzles, surfing the internet on his tablet or just hanging with his beloved family, especially his wife whom he cherished. Walter was a faithful member of Faith Missionary Baptist Church. Walter leaves to cherish his most precious memory his loving and devoted wife of 54 years, Pearline McCall of Peoria, IL; four sons, Terrence (Ann) McCall, Dennis (Lisa) Bailey, Dwane Bailey and Bradford McCall all of Peoria, IL; six daughters, Marcia (Archie) Williams, Lisa McCall, Toni McCall, Diane McCall and Darcy McCall all of Peoria, IL and Denise Sanders of Blaine, MN and Tracey (Tommie) McGhee of Indianapolis, IN; a host of grand, great grand and great-great-grandchildren; and a host of nieces, nephews, other relatives and friends. He is preceded in death by his parents; three sons, Kenneth McCall, Ray Bailey and Ruben Bailey; and two brothers, Ernest McCall, Sr., and Homer McCall. Funeral services will be held at 11 am on Saturday, September 14, 2019 at Faith Missionary Baptist Church at 3020 W. Rohmann Avenue with a visitation at 10 am. Pastor Jackie Adams will officiate. Walter will be laid to rest at Lutheran Cemetery. Simons Mortuary has been entrusted with arrangements. Online condolences may be made at SimonsMortuary.com.

Mr. Walter Lee McCall, 84, of Peoria, IL transitioned peacefully from this life to his heavenly home at 8:50 AM on Monday, September 9, 2019 at his home surrounded by his family. Walter was born on May 29, 1935 in Covington, TN to Jim and Margaret... View Obituary & Service Information

The family of Mr. Walter Lee McCall created this Life Tributes page to make it easy to share your memories.

Send flowers to the McCall family.