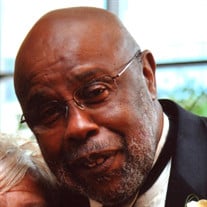 Wiley O’Neal, Jr., 78, of Peoria, IL passed away at 2:17 pm on Tuesday, January 9, 2017 at Erlanger Medical Center in Chattanooga, TN. Wiley was born on September 12, 1939 in Peoria, IL to Wiley, Sr., and Magnolia (McPeace) O’Neal. He was educated within District 150 Schools. He was a 1957 graduate of Manual High School, and then went on to honorably serve our country in the US Army. Wiley married the love of his life on June 11, 1960 in Peoria. Wiley was a foreman for Keystone Wire and Steel for over 43 years until his retirement. Wiley leaves to cherish his most precious memories his loving and devoted wife of 57 years, Patricia O’Neal of Peoria; five children, Steve (Chritty) Harper of Peoria, Katrina (Darrell) Grice of Tampa, FL, Karlene (Lorenzo) Claridy of Hixson, TN, Kristy O’Neal and Kwan (LaQuasha) Hill-O’Neal; five sisters, Odessa Plumlee of Texas, Inele Ross and Gladys Ware both of Milwaukee, WI, Violia O’Neal and Shirley Spence both of Peoria; two brothers, Alvin O’Neal of Maryland and Elijah O’Neal of Milwaukee, WI; 12 grandchildren; one great granddaughter; several nieces, nephews, other relatives and friends. He is preceded in death by his parents; two brothers, Calvin and Levi O’Neal and two sisters, Mary Carroll and Adele Thomas. A two hour visitation will be held Thursday evening, January 18, 2018 from 5 pm-7 pm at St. Joseph’s Catholic Church. A Funeral Mass will be held at 10 am on Friday, January 19, 2018 at St. Joseph’s Catholic Church with a visitation beginning at 9 am. Father Hensler will officiate. Wiley will be laid to rest at Resurrection Catholic Cemetery. Simons Mortuary has been entrusted with arrangements. Online condolences may be made at simonsmortuary.com.

The family of Mr. Wiley Lee O'Neal Jr. created this Life Tributes page to make it easy to share your memories.