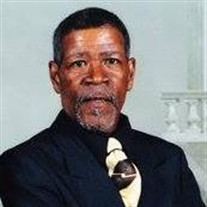 Mr. Wilford David “Sir Lucky King” Peterson, 69, of Peoria, IL transitioned from this life to his heavenly home at 1:03 PM on Saturday, November 30, 2019 at UnityPoint Methodist Hospital in Peoria, IL. On the 28th day of May, in the year of 1950, a meeting was held far from earth. “It’s time again for another birth”, said the angels to the Lord above. This child will need much love and understanding. So, let’s be careful where he is sent; we want his life to be content. Please, Lord, find parents who will love him and grant them assurance of steadfast love. Inspire them to put their trust in you, our gracious Father and righteous Judge. The Lord knowing that he would be the eighth (8th) of eight children born to the lineage of the late James Riley Peterson and Rosie Mae (Milton) Peterson approved and confirmed the birth of Wilford David Peterson to this wonderful set of parents; however there was not only one but two and he was born 19 minutes after the one and thus became the Baby Brother. Wilford honorably served as a Corporal in the US Marine Corp and retired as a reservist. He married Mary Lee (Wells) Lawson on May 6, 1995 in Peoria. Wilford was an accomplished musician. He loved playing music, fishing, walking and watching old western movies on TV. Wilford leaves to cherish his most precious memories his wife, Mary Lawson Peterson of Peoria, IL; 4 step-sons, Earl McBride, Jr., Dale McBride, Robert (Diane) Lawson all of Kansas City, MO and Johnny Thomas of California; 5 step-daughters, Linda Lawson, Sandra (James) Jorden, Carolyn (Orville) Joshua all of Peoria, IL, Eunice Lawson of Kansas City, MO and Deborah (Anthony) Webster of Decatur, IL; one twin brother, Willard “Bill” Peterson and his Fiancé, Gloria Jean; two sisters, Christine Peterson of Calumet City, IL and Aldene Gibson-Jones of Robbins, IL; a host of grandchildren, great grandchildren and great-great-grandchildren all too numerous to mention by name; and a host of nieces, nephews, cousins and friends also too numerous to name, however a VERY, VERY special THANKS goes to his niece, Teresa Rose Peterson for being there and caring and his special friend, Henry Jones. He is preceded in death by his parents; 2 brothers, Robert and James Peterson; 2 sisters, Mary Nell and Annie Jean Peterson; and a step-daughter, Loretta Burks. Funeral services will be held at 11 AM on Saturday, December 7, 2019 at Sovereign Grace Baptist Church with a visitation at 10 AM. The host Pastor is Rev. Alvin Riley, Sr. Elder Henry Gibson of Shabach Christian Church of Orlando, FL will officiate. Wilford will be laid to rest at Abraham Lincoln National Cemetery in Elwood, IL on Monday, December 9, 2019 where full Military Rites will be rendered. Simons Mortuary has been entrusted with arrangements. Online condolences may be made at SimonsMortuary.com.

The family of Mr. Wilford "Sir Lucky King" David Peterson created this Life Tributes page to make it easy to share your memories.

Send flowers to the Peterson family.