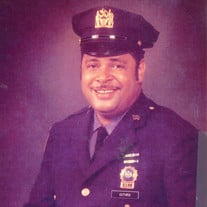 Mr. William Odis Guthrie, 77, formerly of Peoria, IL, passed away at 5 am on Wednesday, October 24, 2018 at his residence in Goose Creek, South Carolina. William was born to the late William Sr., and Ethel (Weir) Guthrie on December 29, 1940 in Peoria, Illinois. He was the 2nd eldest of nine. William has (six) Sisters; Eunice, Patricia, Jeanette, Sharon, Marguerite and Theresa. William also had two Brothers; James and Donald. He grew up in Peoria, Illinois and attended the Peoria school system. He had a great love for Industrial Art Class and Artistic Drawing. He played Football for Manual Training High School Team. “He said he Loved Defense because he could Hit Someone”. William was a US Navy Veteran where he was a Gunners Mate. He joined the Navy after High School and served (4) years. His ship was part of the Armada that blocked the delivery of the missiles during to the Russian/Cuban Missile Crisis. During that time is when he met and married Patricia McBride, and to this union was born two children Dawn and Damion. He also served in the Naval Reserves in Peoria. Once William was honorably discharged from the Navy, he returned home. He worked for the Caterpillar Tractor Company where he was a machine operator. William decided to move to Brooklyn, New York. He acquired work at a Commercial Printing Company, but also decided to attend College in the evenings to achieve a degree in Criminal Justice and several other courses pertaining to Law Enforcement. William became a Police Officer with the New York City Police Department and achieved the rank of Gold Badge Detective and worked for several years before retiring, due to an illness. After his retirement from the Police Department, he moved home to Peoria and became a Longshoreman at the Barge Lines. William was a born-again Christian having accepted Christ as his personal Savior. William leaves to cherish his memories his precious wife Ardell Guthrie of Goose Creek, SC; his children, Melinda Maria Guthrie of Goose Creek, SC and Damion Guthrie and Dawn Guthrie both of Ocala, FL; his siblings, Eunice Easley, Patricia (Rev. Arthur) Williams, Jeanette (Steve) Hopson, Sharon (Lonnie) Davis, Donald Guthrie and Theresa Roland all of Peoria, IL, Marguerite (Michael) Edmonds of Las Vegas, NV; James (Muriel) Guthrie of St. Joseph, MI; 2 grandchildren, and a host of other relatives and friends. He is preceded in death by parents. Bill, we love you and you will be missed! Funeral services will be held at 10:30 am on Saturday, November 3, 2018 at Ward Chapel A.M.E. Church with a visitation beginning at 9:30 am. Rev. Arthur Williams will officiate. William will be laid to rest at Resurrection Cemetery. Rivers Funeral Home were entrusted with arrangements in Goose Creek, SC and Simons Mortuary has been entrusted with arrangements in Peoria, IL. Online condolences may be made at Riversfh.com or SimonsMortuary.com.

Mr. William Odis Guthrie, 77, formerly of Peoria, IL, passed away at 5 am on Wednesday, October 24, 2018 at his residence in Goose Creek, South Carolina. William was born to the late William Sr., and Ethel (Weir) Guthrie on December 29, 1940... View Obituary & Service Information

The family of Mr. William Odis Guthrie created this Life Tributes page to make it easy to share your memories.

Send flowers to the Guthrie family.