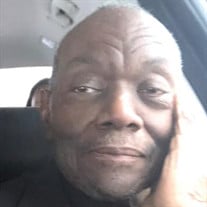 Mr. William McDonald Jones, 81 of Peoria, IL passed away at 9:20 pm on Sunday, June 13, 2021 at his home. William was born on January 22, 1940 in St. Thomas, Virgin Islands USA to Cecil, Sr. and Wilhelmina (Maddicks) Jones. He married Joan Parker on December 31, 1974 in Peoria, IL. She preceded him in death on March 18, 2018. William and his family ventured to Peoria, IL when he was 9 years old. He was educated in the district 150 school system and graduated from Peoria Central High School. After high school, William honorable served our country in the US Air Force where he received the Good Conduct Medal. William worked at Caterpillar as an iron pourer, retiring after 50 years of service in 2009. William leaves to cherish his most precious memories, four sons, John Parker of Atlanta, GA, Marion “Pee Wee” (Diane) Parker, Kenneth “KP” Johnson and Sean Jones all of Peoria, IL; two daughters, Renetta Watts and Shielondria (Shane) Parker both of Peoria, IL; a host of grand, great grand and great-great grandchildren including special recognition to great grandson, Xavier Willams who was also William’s caregiver; and a host of nieces, nephews, other relatives and friends. He is preceded in death by his parents; wife; four sons, Floyd Parker, Willie Johnson, Tonaio Johnson and Ricky Johnson; three grandsons, Marlon Johnson, Corey Pope and Edward Hendon; one brother, Cecil Jones, Jr.; one sister, Hilda Jones and one step-brother, Frankie Jones. Funeral services will be held at 10 am, Saturday, June 26, 2021 at Faith Tabernacle C.O.G.I.C., with a visitation beginning at 9 am. Host Pastor is Elder Felton Beck, Jr. Rev. Harry Williams of Peoria Friendship Baptist Church will bring words of comfort to the family. William will be laid to rest at Lutheran Cemetery. Simons Mortuary has been entrusted with arrangements. Online condolences may be made at SimonsMortuary.com. The service will be live streamed on Simons Mortuary's Website or Facebook page at https://www.facebook.com/Simons-Mortuary-232095303487150 promptly AT THE TIME OF THE SERVICE. The church can socially distance. To be consistent with recommendations from the National Funeral Directors Association (NFDA), funeral home directors have been instructed and should follow CDC guidelines on gatherings, including those directly related to funerals, visitations, or graveside services. *In an effort to mitigate the spread of COVID-19, we ask that everyone in attendance: wear a face mask and refrain from hugging, kissing and shaking hands (as hard as it is to see someone you care about and not touch them). *It is our responsibility as a Funeral Directors, to do everything we can to advise families in order to honor our beloved Families and to keep everyone as safe as possible. Thanks in advance for your cooperation!

Send flowers to the Jones family.