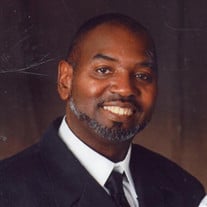 Rev. William Otis Sturdivant, Sr., Pastor of St. Luke Missionary Baptist Church, 64, of Peoria, IL passed away peacefully on Thursday, August 3, 2017 at 5:30 pm at the Veterans Illiana Health Care Center, Danville, IL. William was born on December 19, 1952 in York, Alabama to Roy and Jessie Bell (Nixon) Sturdivant. He married the love of his life, Deborah Kawaii on November 29, 1997 in Reno, Nevada. William accepted Christ at an early age under the leadership of Pastor Felix Nixon at the Mt. Herman Missionary Baptist Church of York, AL. In 1966, the Sturdivant family relocated to Peoria, IL. The family joined Grace Missionary Baptist Church under the leadership of Pastor Whitehead. In the early ‘70s he attended the All Nations Pentecostal Church of God In Christ under the leadership of Elder Turner at which he accepted his calling into the ministry. William graduated from Woodruff High School in 1971. In 1993, he joined St. Luke Missionary Baptist Church under the leadership of his brother, Pastor T.C. Sturdivant. In 1994, he was ordained as an associated minister. In 2005, he was elected interim Pastor of the Nauvoo Missionary Baptist Church in Nauvoo, IL. After the homegoing of Pastor T.C. Sturdivant in 2012, William was elected as Pastor of the St. Luke Missionary Baptist Church in March of 2013. William was a U.S. Army Veteran, retiring in 1993 after 21 years of service. During his military service, he attended Troy State University in Troy, AL where he received his Associates Degree in Military Service. William also retired from the US Postal Service in 2014 with 18 years of service. He was a member of the American Legion, National Baptist General State Convention and the Peoria Ministerial Alliance. William enjoyed reading, writing, bowling and traveling. One of his passions in life was remodeling projects, including his church and home. William loved spending time with family and friends. William leaves to cherish his precious memories, his loving wife of 19 years, Deborah Sturdivant of Peoria; two sons, William O. Sturdivant, Jr., of Pablo Alto, CA and Jeremy Sturdivant of Peoria; three daughters, Diona Swinney of Douglasville, GA; Miranda Sturdivant of Snellville, GA and Renata Sturdivant of Carbondale, IL; one god daughter, Attevy Talley; two brothers, Danny B. (Penny) Sturdivant and Floyd (Gladys) Sturdivant both of Peoria; three sisters, Rosie Ruffin and Melvie Thomas both of Peoria and Eliza Kelly of Jamaica, NY; six grandchildren, Brittney McClain, Nyiah Sturdivant, Marquazha Stevenson, Kevin Childrey, Jahree Jones and Simone Gates; two great grandchildren, Brooklyn Jones and Brayden Taylor; and a host of nieces, nephews, other relatives, friends and his St. Luke Church family. He is preceded in death by his parents and six brothers. Funeral services will be held at 11 am on Friday, August 18, 2017 at New Morning Star M.B. Church. There will be a 3 hour visitation Thursday evening, August 17, 2017 from 5pm – 8pm at New Morning Star M.B. Church and visitation two hours prior to the funeral beginning at 9 am. Host Pastor Cleveland Thomas, Sr. will officiate and Pastor Claude L. White, Jr., will bring the eulogy. William will be laid to rest at Parkview Cemetery where US Army Military Honors will be rendered by the Tazewell Area Ceremonial Team . Simons Mortuary has been entrusted with arrangements. Online condolences may be made at SimonsMortuary.com.

The family of Pastor William Otis Sturdivant Sr. created this Life Tributes page to make it easy to share your memories.

Send flowers to the Sturdivant family.