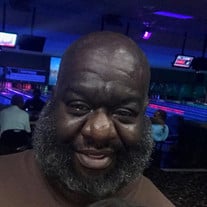 Mr. Willie Blue, Jr., 49, of Peoria, IL passed away at 6:45 pm on Wednesday, September 19, 2018 at his home. Big Blue, as he was affectionately known, was born on September 12, 1969 in Chicago, IL to Willie Sr., and Mary (Henderson) Blue. He attended Harlan Community Academy High School, Chicago, IL. Willie is survived by his loving special friend, Marla Marbley of Peoria; two sons, Aaron Mosley and Dominique Mosley both of Atlanta, GA; one daughter, Willieanna Blue of Peoria; three brothers, Jerry Blue, Terry Blue and Charleston Blue all of Chicago; two sisters, Sonja Blue and Simone Blue all of Chicago, IL; and a host of nieces, nephews, cousins, aunties, uncles and friends. He is preceded in death by his parents and grandparents, Clarence Sanders, Sr., and Estella Sanders. Big Blue was a father figure and a positive role model to many children. He was loved by so many, young and old. He will have a special place in the hearts of the Marbley, Cayson and Stenson families as well as the hearts of all Peoria. Private memorial services will be held in Peoria and Chicago at a later date. Preston-Hanley Funeral Home & Crematory, LLC. has been entrusted with arrangements. Online condolences may be made at SimonsMortuary.com.

The family of Mr. Willie "Big Blue" Blue Jr. created this Life Tributes page to make it easy to share your memories.

Send flowers to the Blue family.