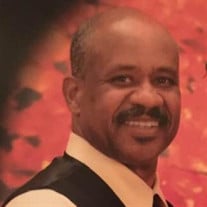 W. George Bobo, 61 of Morton, IL transitioned from this life to his heavenly home at 7:33 PM on Thursday, August 22, 2019 at Unity Point Methodist Hospital surrounded by his family. George was born February 9, 1958 in Okolona, Mississippi to Martha Faye Bobo and George Bogan, Jr. He was a 1977 graduate of Okolona High School where he played basketball and football. Football was his favorite. In 1976 George was awarded the trophy Most Valuable Player. George furthered his education at Itawamba Community College where he majored in Psychology and was a defensive player in football. George served his country in the US Marine Corp as an engineer for 20 years. He traveled all across the world instructing and leading Marines. He also served as Chaplin in his unit. George retired from military duty in 2000. While serving in the Military, George met the love of his life, Edris Magee, on a blind date in Oceanside, California. George shared with Edris that he had a vision in a dream God showed him a silhouette of her and three children. They married on April 14, 1984. To this union, three children were born, Erika, Monika and Jonathan. George loved his family. The military allowed he and his family to travel across the world and have many memories of family time together. He was a servant of the Lord and if he could help somebody, he would. A true man of God, George is an example for others to follow. George also worked at the American Red Cross and supported many Central Illinois Projects. George had a love for sports trivia, American History and birds of prey. He was a true story teller. George leaves to cherish his most precious memory his loving and devoted wife of 35 years, Edris Bobo of Peoria, IL; his children, Erika Bobo and Monika Bobo both of Peoria, IL and Jonathan Bobo of Denver, CO; his grandchildren, E’Laina Barber, Ahmad Keita and Emira Diggins all of Peoria; his mother, Martha Faye Rogers of Chicago, IL; one brother, Roger Bobo of Chicago, IL; four sisters, Martha “Linda” Gibson, Barbara Foster and Nadine Bobo all of Chicago, IL and Bonnie Issac of Texas. He is preceded in death by his father; one sister, Jammie Rogers; and his grandparents, George Henry and Carrie Mae Bobo. A visitation will be held at 1 PM - 1:30 PM at Mt.Zion Baptist Church, Joilet, IL. George will be laid to rest at Abraham Lincoln National Cemetery on Thursday, August 29, 2019 with full U.S. Marine Corp Military Honors. A Celebration of Life Service will be held at 11 AM on Saturday, August 31, 2019 at Word of Faith Christian Center Church, gathering at 10:30 AM. Bishop Leroy Davis will bring words of comfort. In lieu of flowers, memorials may be made to Word of Faith Christian Church. Simons Mortuary has been entrusted with arrangements. Online condolences may be made at SimonsMortuary.com.

W. George Bobo, 61 of Morton, IL transitioned from this life to his heavenly home at 7:33 PM on Thursday, August 22, 2019 at Unity Point Methodist Hospital surrounded by his family. George was born February 9, 1958 in Okolona, Mississippi to... View Obituary & Service Information

The family of Mr. Willie George Bobo created this Life Tributes page to make it easy to share your memories.

W. George Bobo, 61 of Morton, IL transitioned from this life...

Send flowers to the Bobo family.