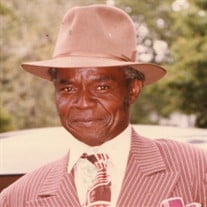 Mr. Willie “Be Bop” James Burney, 87, of Peoria, IL passed away at 7:35 pm on Sunday, March 25, 2018 at UnityPoint Health Methodist, Peoria, IL. “Be Bop” was born on July 25, 1930 in Boston, Georgia to James and Inez (Childs) Burney. He married Bernice Johnson on January 25, 2007 in Peoria, IL. Willie was a construction worker for CA Powley Construction Company in East Peoria, IL and was a member of the Labor Local Union 165. He loved to listen to the Blues and loved spending time with his family and fixing cars. “Be Bop” was a U.S. Army Veteran and member of the Army Reserves. Willie leaves to cherish his most precious memory his wife, Bernice Burney of Peoria; one son, Willie Booker of Peoria, IL; five daughters, Diane Bond of University Place, WA; Jaton Watkins and Bernetta Kelly both of Peoria; Nikki Booker of Greenville, SC and Shawntell Kelly of Peoria; one sister, Lillie Scott of Philadelphia, PA; 23 grandchildren, 44 great grandchildren; two special friends, Rev. R.W. Randle and Bobby Cagle, whom he called his brother, one brother-in-law, Herman Lee Johnson, whom he called his son; three special caregivers, Brooklyn Kelly, Shawntell Kelly and Shanea Booker; and a host of nieces, nephews and other relatives and friends who loved him. He is preceded in death by his parents, 1 sister, 2 brothers, 3 daughters, Angie, Karen and Willette, 3 grandchildren and 1 great grandchild. Funeral services will be held at 11 am on Saturday, March 31, 2018 at Sovereign Grace M.B. Church with a visitation beginning at 10 am. Pastor Alvin Riley, Sr. will officiate. Willie be laid to rest at Camp Butler National Cemetery, Springfield, IL where U.S. Army Military Honors will be rendered on Monday, April 2, 2018. Simons Mortuary has been entrusted with arrangements. Online condolences may be made at SimonsMortuary.com.

The family of Mr. Willie "BeBop" James Burney created this Life Tributes page to make it easy to share your memories.

Send flowers to the Burney family.