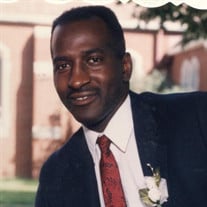 Mr. Willie Frank Jackson, 59, of Peoria, IL passed away at 2:23 pm on Tuesday, September 26, 2017 at his home. Willie was born on October 30, 1957 in Peoria to Rev. Albert, Sr., and Annie Bell Jackson. He accepted Christ at an early age at Rising Sun Christian Church. He was a 1975 graduate of Woodruff High School where he was a star basketball player. His success as a basketball player at Woodruff earned him a scholarship to attend and graduate from Hillsboro Community College in Hillsboro, Texas. He later attended East Central Oklahoma State University. Willie later went on to work as a Pest Control Technician. Willie was a gentle giant. He was a big brother and mentor to his siblings and many others within the Peoria Community. He was a great uncle, very supportive of his nephew’s athletic achievements. Willie was a sports spectator. He especially loved fishing. He loved spending time with his family. Willie leaves to cherish his most precious memories his loving family which includes four brothers, Nate (Judy) Jackson, Johnny (Linda) Jackson, Richard (Gwendolyn) Jackson and Henry (Ruthanne) Jackson all of Peoria; eight sisters, Maggie Wallace and Frances Lewis both of Chicago, Ruthie Lee (Roosevelt) Davis of Lexington, MS, Gladis Davis, Rose Jackson and Emma Jackson all of Peoria, Cheryl (Fredrick) Hicks-Garrett of Columbus, OH and Rosie Leman of Greenwood, MS; nieces, Corrie and Crystal Jackson with whom he shared his home; a host of other nieces, nephews, cousins other relatives and friends who also adored Willie. He is preceded in death by his parents; five brothers, William Jackson, Jimmy “Albert Jackson, Jr., William Jackson, Robert Jackson and Eddie Jackson and two sisters, Elizabeth Washington and Annie Mae Jackson. Funeral services will be held at 11 am on Saturday, October 7, 2017 at Sovereign Grace Baptist Church with a visitation at 10 am. Pastor Al Ivy of Central Church of God will officiate. Simons Mortuary has been entrusted with arrangements. Online condolences may be made at SimonsMortuary.com.

The family of Mr. Willie Frank Jackson created this Life Tributes page to make it easy to share your memories.