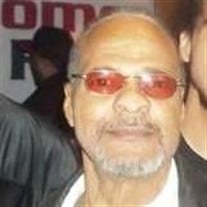 Mr. Willie Dee Johnson, Jr., 70, of Peoria, IL passed away at 10:44 pm on Thursday, August 30, 2018 at OSF St. Francis Medical Center surrounded by his family. Willie was born on December 15, 1947 in Peoria, IL to Willie, Sr., and Joan (Parker) Jones. Willie was a veteran. He was US Army Retired, serving his country for 20 years before his retirement in 1990. He received his High School Diploma and his Bachelor’s Degree during his service in the Army. Willie is survived by his son, Damian “Shelton” Johnson of Peoria; three daughters, Dalia (Daniel) Kummer of Peoria, Latisha (Greg) Riley of Columbus, OH and Danyika Johnson of Peoria; his step father, William Jones; six brothers, Kenny Parker, Tony Johnson, Johnny Parker, Ricky Johnson, Sean Jones, and Marion Parker; two sisters, Renetta Watts and Shielondria (Shane) Parker both of Peoria; 30 grandchildren and a host of great grandchildren, nieces, nephews, other relatives and friends. He is preceded in death by his parents and one brother, Floyd Parker. A memorial service will be held at 12:00 noon Thursday, September 13, 2018 at Riverside Community Church, with a visitation beginning one hour prior beginning at 11:00 am. Military Honors will be rendered at Camp Butler National Cemetery at a later date. Simons Mortuary has been entrusted with arrangements. Online condolences may be made at SimonsMortuary.com.

The family of Mr. Willie Dee Johnson Jr. created this Life Tributes page to make it easy to share your memories.