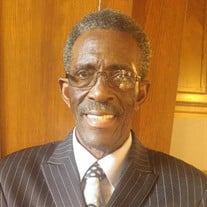 Mr. Woodrow Jackson, Jr., 76, of Peoria, IL peacefully transitions to be with the Lord at 11:45 am on Tuesday, February 6, 2018 at his home. Woodrow was born on August 15, 1941 in Robinsonville, Mississippi to Albert and Geneva (Eckles) Jackson. He married Mary Jean Gaines in Peoria on February 12, 2011. Woodrow accepted Christ at an early age. He joined True Vine of Holiness Missionary Baptist Church on October 22, 1978 in Chicago, IL, where he served as an usher and eventually became a Trustee in 1989 and a Deacon in 1996. He was a faithful member for over 32 years until his retirement and move to Peoria in 2011. Woodrow joined Morning Glory Community Church April 14, 2013. Woodrow worked for over 50 years in the Chicago area. He was employed at Pepsi Cola for 30 years retiring in 1994. He later worked for Cook County Highways and Gatling Funeral Home simultaneously for 17 years retiring in 2011. Woodrow leaves to cherish his most precious memories his loving and devoted wife, Mary Jackson of Peoria; two sons, David Gaines of Dixon, IL and Cedric Hannah of Indianapolis, IN; five daughters, Karen Jackson of South Holland, IL, Kendra Sanders of Aurora, IL, Cathy Thompson of Roswell, GA, Michelle Jackson of Memphis, TN and Tabitha (Mario) Hannah-Lewis of Peoria; four brothers, Eugene (Dorothy) Jackson, Eric Jackson, Jerry Jackson, Dandy Jackson; five sisters, Louella Mayfield, Salley Mae Fife, Gloria Jackson-Jordan, Evon Jackson and Diane Jackson-Franklin, 13 grandchildren, 6 great grandchildren and a host of nieces, nephews and other family who loved him. He was preceded in death by his parents, three brothers, Willester Jackson, Napoleon Jackson, Albert Jackson, Jr., two sisters, Bessie B. Coates and Jessie Lee Jackson. Funeral services will be held at 1 pm on Saturday, February 17, 2018 at Morning Glory Community Church with a visitation beginning at 12 Noon. Pastor Marlon Young will officiate. Woodrow will be laid to rest at Swan Lake Memory Gardens. Simons Mortuary has been entrusted with arrangements. Online condolences may be made at SimonsMortuary.com.

Mr. Woodrow Jackson, Jr., 76, of Peoria, IL peacefully transitions to be with the Lord at 11:45 am on Tuesday, February 6, 2018 at his home. Woodrow was born on August 15, 1941 in Robinsonville, Mississippi to Albert and Geneva (Eckles) Jackson.... View Obituary & Service Information

The family of Mr. Woodrow Jackson Jr. created this Life Tributes page to make it easy to share your memories.